When a body is undergoing pressure treatment, it experiences slight changes to the targeted organ, and react according to the pressure applied. These reactions are called as reflex zone therapy reactions, and are classified into Local and General reactions. One can possibly describe how a body will react to the applied pressure treatment, and what changes can occur inside the body following Reflex Zone Therapy. Many people wonder how is this possible? and Why do such changes take place? Well, the answers to these above questions are not yet known, but still people respect the benefits of reflexology treatment even today. The reflex zone therapy local reactions are relate with the zone types and the organs inside our body.

Local Reactions are produced on all organs that happen to lie in the same zone as the toe (or longitudinal section of foot) that is stimulated. You will recall that from the observed facts, Dr. Fitzgerald was led to suspect and later believe in the existence of ten longitudinal zones in the body. For example, check out the below figure which focuses on foot pressure points. Here if the little toe of the right foot is stimulated, all body parts and organs lying in that zone (right foot-leg-thigh, right side of trunk, a part of large intestine, a part of liver, right side of neck, right molar teeth, right outer ear, right temple, etc.) are affected. 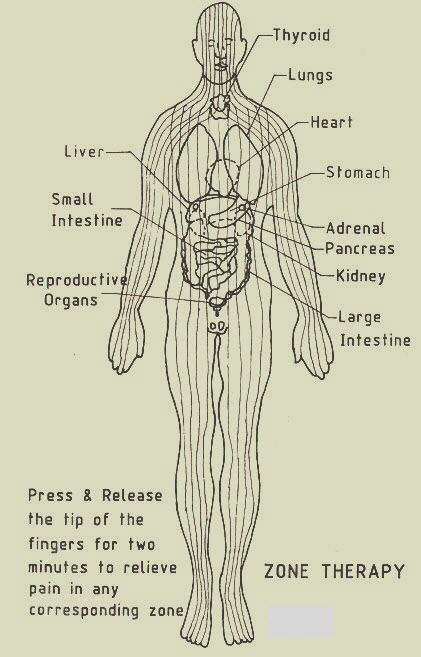 The exact nature of affection usually depends upon the method and the duration of stimulation. For example, alternating (press-release-press-release type of) stimulation of little toe for a short period will cause a mild stimulation on the various organs of right zone. However, a constant and prolonged stimulation on the same toe will gradually cause analgesia of the organs and parts lying in this zone. Thus, these particular zones are useful to find the disorder organs and improve the process of treatment.

History of Reflexology proves that a holistic approach is very much important to pressure treatments. No single organ in our body can be healthy or diseased in isolation of the rest of the body. The treatment should not be directed only to the diseased organ, but also to the entire body, which helps in better and faster results.

How These 8 Acupuncture Points Help You Quit...

Why is Acupuncture known as a Form of...

How Acupuncture Helps in Treating Acne, Eczema, and...

Get Rid of Season Allergies with these 9...

The Power of Reflexology- A Perfect Treatment for...

Everything about Treating Piles with Acupressure and Acupuncture...