The history of reflexology talks about many hidden reflexology zones in human body. Zone theory is the basis of Reflexology, and Zones are a system for formulating relationships between various parts of the body. Zones are considered to be some guidelines or markers linking one part of the body to another. There are ten equal longitudinal (vertical) zones running through out the length of our body from the top to toe of our body. On soles, each toe will be a part of one particular zone, and it should be noted that a zone is not a surface marking. In fact, it runs through the body much like an arrow piercing from the front and emerging from the back. In other words, zones can be compared to slices of bread, where each big toe not only represents a zone part, but also represents one half of the head (all five zones). 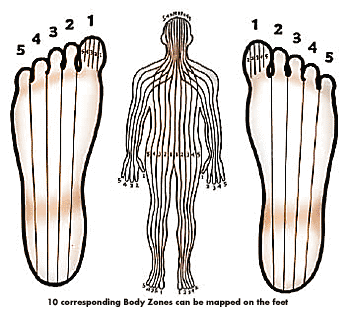 Dr. Fitzgerald mentioned a lot of benefits with reflexology, and propounded a theory which says anything which is wrong in any part of a zone will affect the entire zone. This is seen mostly through out the length of the body. Sensitivity or tenderness/pain point in a specific spot on the foot tells us that something is wrong in some part of the zone. According to Dr. Fitzgerald, a particular organ or a part of the body could be completely influenced through a toe, which corresponds to the same zone. Later, few experiments revealed that stimulation of toes did not always serve the purpose adequately. For a more certain treatment of various organs, specific parts of foot, along the entire soles, called for stimulation. This gave rise to the concept of lateral (horizontal) zones. These are the most important concepts of reflexology zones in human body.

The main purpose of lateral zones is to fix the image of the body onto the feet. But it should be more precise about the location. On the sides of fore foot, we  will find two prominent bones. On your sole, you can find a transverse line passing through the tips of these prominent bones. This line is the shoulder line. The area of the foot from toe-tips to this shoulder line comprises horizontal zone 1 and contains trigger points for the organs of the head and neck. 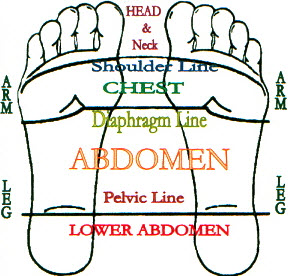 The sole of the fore foot contains two mountain-like structures, and are called as the ‘balls’ of the foot. These balls are of a much darker color as compared to the middle of the sole. If you draw a line passing through the lower borders of the balls, you can find the diaphragm line. Diaphragm is a dome-shaped muscle that separates chest from the abdomen. The area of the foot between the shoulder line and diaphragm line comprises horizontal zone 2 and contains trigger points for organs of the chest.

The another prominent bone would be the middle of outer border foot. If you draw another transverse line passing through this prominent bone, you will find the navel or waist line. In anatomical terminology, this line represents the L4 (the fourth lumbar vertebra). The area of the foot between the diaphragm and the navel lines comprises horizontal zone 3 and contains trigger points for most organs of abdomen. And if you observe the sole of the heel, you will find an oblong dark colored area. This is the area of the foot between the navel line and the junction of the two colors of skin. This is the junction of light colored skin of mid-sole and dark colored skin of the heel, and comprises horizontal zone 4, which contains a trigger points to the organs of lower abdomen and the pelvis.

The organs that lie near to the entire front surface of the body, can be easily reached. This goes through the trigger points on the upper surfaces (dorsum’s) of the two feet. Whereas the organs that lie nearer the entire back surface of the body can more easily be reached through the trigger points on the soles.With the help of these four horizontal reflexology zones in human body, (ten vertical zones (five on each foot)), you can determine the trigger area of any organ.

Mobility Exercises to Treat Reflexology to Others and...

Can visiting a reflexologist for treatment help me with my cancer?

Yes, surely it can , visit one at the earliest.